Thanks to Rabbi Shimon bar Yochai

Written by: Or David
Category: About the Yeshiva
Published: 10 April 2018

The story of the connection between Rabbi Shimon Bar Yochai and the Rosh Yeshiva. 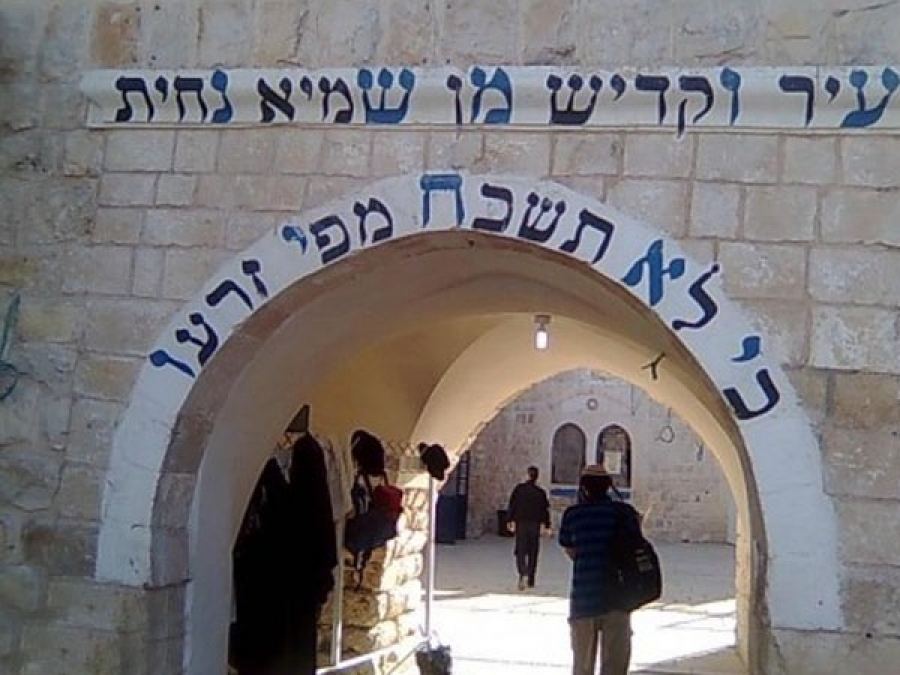 Every student at “Or David” Yeshiva knows that Rabbi Daniel Zer travels to Meron every month to the grave of the holy Tanna Rabbi Shimon Bar Yochai (Rashbi) with a large group of students. Together they learn all night the holy books “Idra Raba” and “Idra Zuta” authored by the saintly Tanna. They pray the morning service (shacharit) at sunrise (‘vatikin’) with great concentration and intent and return to the Yeshiva in Bnei Brak. What is the secret that connects the Rosh Yeshiva to the holy Tanna Rabbi Shimon Bar Yochai? In order to understand the connection between the holy Tanna and Rav Zer, we need to go back a few decades to the days of Rav Zer’s childhood. When young Rav Zer would speak with his classmates or family everyone would always tell him: “Speak slower! You speak too fast, we cannot understand you!” When he would answer a question in class, the teacher could not understand him. “Daniel, speak slower!” The teacher would say. Daniel grew up and went to Yeshiva. There too he had trouble speaking slowly. And again his teachers would say: “Daniel, better you speak once clearly than three times unclear!” Besides his Rebbes, his friends too could not understand him and no one wanted to be his Chavruta (learning partner). His extended family, aunts and uncles really worried about the young Daniel and kept asking: “What will be?”. . . Daniel grew up and attended the famed “Porat Yosef” Yeshiva in Jerusalem. “Porat Yosef” Yeshiva hosted great many sages and many students came to “Porat Yosef” to bask in their knowledge and learn from their awe of Heaven. The boy, Daniel, whose soul longed to serve Hashem developed close relationships with his righteous rabbis.

One day, one of the great Rabbis of “Porat Yosef” invited Daniel to join his group to pray at the holy sites of Tzfat and Meron. While initially Rav Zer deliberated and was unsure whether he should go, he finally made up his mind, and decided to join the group. The journey began with vatikin (sunrise prayer) in the Bet Midrash of the holy Mekubal Rabbi Mordechai Sharabi z”ya in Jerusalem. After the prayer service, the group asked Rabbi Sharabi for a blessing in lieu of their trip. Rabbi Sharabi blessed the group and even gave them a coin as a segula (spiritual ploy) for protection from dangers along the way. The group indeed saw miracles all along the way. Their first stop was Tzfat at the grave of the holy Ari z”l. When they ended their prayers at the grave of the Ari, the group noticed that sunset was quickly approaching and that they still need to pray mincha (the afternoon service). They went to the city of Tzfat and by Divine Providence found a place to pray mincha. After mincha, everyone decided to leave Tzfat and continue traveling to Meron to the grave of the holy Tanna Rabbi Shimon Bar Yochai. They arrived at the holy site with great joy and danced enthusiastically for two hours. In the late night hours Daniel began to read the holy book ‘Idra Zuta’ aloud. After a few moments he noticed an old man standing next to him and watching him. After a few more moments another elderly Jew arrived and stood there listening to Daniel reading the holy book. Young Daniel felt such a transcendent feeling that he cannot describe in words. After another twenty seconds, the two elderly men disappeared and Daniel continued reading from the holy book.

When Daniel finally finished reading the holy book, it was very late at night and there was no longer any public transportation going back Jerusalem. The group, therefore, decided to go pray at the grave of the holy Tanna Rabbi Yohanan the Shoemaker and for sunrise morning prayer they returned to the grave of Rabbi Shimon Bar Yochai. The rest of the story will be told the way Rabbi Zer often tells it: “Before we returned to Jerusalem I went to pray at the grave of Rabbi Shimon Bar Yochai once again. When I lifted my head from the grave, I felt the scent of Gan Eden (paradise) accompanying me. We then returned to the Yeshiva in Jerusalem. After I went to the mikvah in honor of Shabbat, I once again felt my entire body filled with this most special scent. Suddenly I felt that the pressure of my rapid speech had disappeared, and that I could now speak in a more relaxed way.

On Friday night I prayed a long Amida (the 18 benediction prayer) with great concentration and intent, and the more I concentrated, the more I felt this wonderful scent getting stronger and stronger. When I finally finished my prayer, the Synagogue was empty. When I made a blessing over some cloves, the scent of Gan Eden became even stronger. Every Shabbat I walk from the Yeshiva in Katamon to Machane Yehuda where I join a group of men to recite the entire book of Psalms at the house of the Kabbalist Rabbi Mordechai Sharabi Zy”a. Normally, this walk was very strenuous for me. However, this time I felt as strong as an ox. I did not feel tired or fatigued. I became a different person. When one gains spiritual strength, it’s different.

Joining us for Psalm reading was a great saint by the name of Rabbi David. Rabbi David was very elderly, a hundred and five years old, and I would watch him every Shabbat as he recited Psalms with such passion. That Shabbat, after coming back from my trip to Meron, as I stood at the doorway, the Tsaddik Rabbi David rushed over to greet me with a blessing. In his holiness he recognized what had happened to me. The scent of Gan Eden lasted for three days. I did not tell anyone about the feelings that accompanied me except for one good friend, the Mashgiach (spiritual guide) of the Yeshiva, Rabbi Schlanger Shelita. The Mashgiach came over to talk to me and asked “What happened Daniel? You are speaking clearly!” I then shared with him my experience at the grave of Rabbi Shimon Bar Yochai. The Mashgiach came over to me the next day and said, ‘I shared your story with the rabbis of the yeshiva and they were in awe.’”

From this story we see how all of the institutions of “Or David” were essentially established in the merit of Rabbi Shimon Bar Yochai. Without this experience, if the Rosh Yeshiva gave a forty-minute sermon, the listeners would have said “We didn’t understand anything the Rav said. He spoke too quickly.” How did he feel when he was constantly told “I cannot understand you?” How would the Rav have been able to bring people closer to Torah? Would there even have been an “Or David” Yeshiva? All this is thanks to Rabbi Shimon! We see from here a tiny glimpse of the greatness of Rabbi Shimon Bar Yochai, and the holy Tannaim. Therefore, the Rosh Yeshiva travels every month to the grave of Rashbi in gratitude of the great gift he received. When the great Tanna Rabbi Shimon Bar Yochai finally left the cave after thirteen years of seclusion with his son, Rabbi Elazar, learning Torah every day neck deep in mud, he was met by his son-in-law Rabbi Pinchas ben Yair. He took them to the bath and began crying when saw how much suffering Rashbi was enduring from the wounds caused by the mud.  He said crying, “Woe is to me, that I saw you like this.” Rabbi Shimon Bar Yochai, however, responded, “You should be happy to see me like this. It is thanks to this suffering and dedication that I merited to learn my Torah.” From here learned our Sages: “There is no Torah except for the one who kills himself over it.” It was because the Rashbi learned in the cave in the mud pit with this tremendous dedication that his endured.